John Carlton Marketing Tips: How to Market a Seminar 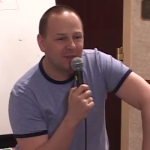 Jason is writing copy to sell a seminar, and is looking for advice. John and Lorrie offer their experience:

Jason: So, does anyone have any tips on selling seminars? And the difficulties?

Lorrie: I work with guys that already have a high profile, like Mark Victor Hansen and Les Brown, and it’s…they are…I can’t tell honestly, it’s hard for me to say how much my copy affects it, because they’ve got people going to this all the time, so it’s hard to measure.

John: I think I’ve told you this before, it’s that the secret to selling seminars is to use a house list. Trying to sell cold people on a seminar is a really tough sell. Guys like Ron LeGrand do it, but they put a lot of money and a lot of energy into it. You’d better have your game down pat, because you are going to spend a lot to get the seats filled.

Lorrie: So, let’s see, seminars. What, specifically? Just advice in general. Don’t put the date at the top, a la Dan Kennedy. Wait until they get to the bullets and the benefits before, because they may see the dates and say “I’m not going, because that’s my anniversary”. But, when they realize how great of a seminar it is, they’ll go “You know what, I think I will take a vacation to Reno at the same time”.

John: That’s a real good point. That’s a real common mistake that people make. They give the reader an opportunity to say “no” before you’ve done any selling at all. In fact, you really shouldn’t bring up the fact that you have a seminar until you’ve sold them on what they’re coming away with.

If you see guys like Dan Kennedy do that, it’s because he has a house list nurtured and primed on doing this, and they are not put off by the fact. In fact, they are waiting…”when’s he going to give that fall seminar? What day is his December seminar?”, because he has about 300 guys that are going to plan their Christmas vacation around what he does in December.

Very rare. There’s him and probably a few other guys who do that. Anything else, Lorrie?

John: Thanks, good stuff. And, actually, she mentioned the names, so what you want to do is go find the guys she’s written for. They’re easy to find, just Google. And, just look at their stuff. Look at what they’re doing. Keeping in mind that you can’t copy a lot of what they’re doing. Figure out who they’re going to. When they’re going to house lists, and you have a guy that doesn’t have a house list that’s rabid about him, that will tear open everything that gets mailed or go to the email immediately, you’re playing a slightly different game.

But, you can still pay attention to what they’re doing. And, a lot of the stuff is blueprint writing. There is more or less a model that you’re writing.

Aaron: John, the reason we’re here, and we had a Cancun trip, and we cancelled the Cancun trip to come here.

John: Because of the snow, right.

Aaron: The reason was because of the deadline. You know? “This might be the last time I ever do it.” And we were already locked into your writing and the Insider Club, and I was like “well, you know what? He’s got me. We’re going.” And that’s why we’re here. Both the deadline and the fact that you said “we might not do this again”. And I just didn’t want to miss out on it.

John: By the way, I really doubt I will do this again. This is pretty exhausting for me. It takes a lot of “gear up” and stuff.

Lorrie: You said that the last time.

John: No, I didn’t . That’s Dan Kennedy, who has retired 5 times. He is on his fourth. He is the Rolling Stones of the business. On his fourth retirement tour.

Click here to request your own personal Hot Seat.