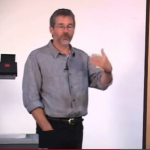 John Carlton explains how the best in a field uses fewer tools.

And it wasn’t a retro thing he was talking about. He was talking about all the pros he knew only had a few tools. It was the rookies that had all the big stuff. It’s kind of like golf. You know, I’ve made the points several times. We did it with Milt. But I used to ask Doc O’Leary to go find the worst club he could find. One time I had to do it when I was at Milt’s. I went to the pro shop and they had a bucket of old drivers. It was like a joke. I had to pick the worst driver I could find. It was unraveling, persimmon head, it was warped. It was melted on the backside. Someone had put a cigarette on it or something. I think we found a sliced ball also.

The point was, put it down and then he hit it straight and true. And then we got Bobby Schaffer to hit a ball with a piece of rope. Put on knot in a rope and knocked it over a house.

Actually, just to carry that further, when I started golfing I bought a starter set. It was a cheap little set. The whole set cost less than an average club does now. Now, I’m four sets into the game. I’m not playing any better. Actually, I have a theory that the worse clubs you have, the better, because you’re relying on touch or feel.

From years of playing baseball, I can throw wadded up piece of paper into a trashcan from across the room. That’s a cool little skill. When I was applying that to golf, I was playing pretty well. Then I started trying to listen to people and screwed it all up.

In your business, don’t take it for granted what it is that people want of what you’re selling. I talked about consultancy, and were going to talk about that in the next ad. The guy in the next ad is one of my favorites, one of the more simple ones. It looks like it was typeset by a gang of monkeys that broke into the lithographer’s.

But, the big thing was, after talking with the guy I figured out that what he was selling wasn’t what the guys wanted. He was dealing with chiropractors, and one of the things they wanted was more time off. Maybe they didn’t really know it. All everyone says is that if only they could make more money their problems will go away. If that’s your market… that’s biz op, by the way… If they’re thinking that if they could make $100,000 they’ll be the richest man on the block and everything will be fine, then that’s how you have to sell it.