John Carlton Copywriting Tip: How to Create an Effective Headline 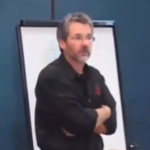 John critiques a headline that has a lot of stuff jammed into it.  The letter is for a practice development product for dentists.

Headline:  “Who else wants to discover the magical secrets of earning an extra $39,821 as a dentist in the next 17 days… While working three days a week (or less), enjoying a better sex life, stress-free life even though the economy sucks!”

This is very much a first draft. It doesn’t flow at all, and what is interesting is that Ed took a headline of mine that didn’t flow and put a bunch of beavers in there, they set up bands and stuff. I don’t know where to start in this case, “earning” would be okay, it’s one of those words that I would work on. I think the original headline had “earning” in it.

What about “magical”, anybody? Seems unreal. Dentists don’t believe in magic they believe in… Nitrous oxide. Magical secrets… boy, you’re making a big promise there. Actually, “magical secrets” takes away from your big promise. Who believes in magic? Kids. Now, if you were to say “works like magic” you’re tapping into “it works so well it’s almost unbelievable”. “It worked like magic”. Why do I say it works like magic? Because magic is kind of unbelievable.

“Magic” doesn’t carry that much weight anymore. It’s so overused. It’s been used by bad copywriters instead of other, better words that they could’ve used. It’s kind of like a power word that has been ruined.

Okay, here is where I stumbled first. “Who else wants to discover the magical secrets of earning an extra $39,821 as a dentist in the next 17 days…” Up until now it has developed a bit of a rhythm “While working three days a week (or less)… Bam! Stopped me right there. Didn’t you just say 17 days? How does that fit in with the three days?  Are the three days in the 17 days? I think what you meant to say is that you would work three days a week for the rest of your career.

So, you have to decide what your USP is. You took my headline, which had multiple USP’s. Something like earning more, working less, taking vacation, stress-free and debt-free. I struggled over that. I pained, because I wanted to make it flow. The client knew what the hierarchy of these desires was. Working less was high up there. The stress-free and debt-free parts were not as important they were important enough to make the headline but not important enough to be part of the USP.

So you have to be clear on what you are offering the guy. What is he going to walk away with from this?